During Cooldiga Street Art Festival I was invited to host a portrait workshop. We wanted to involve locals in the art activities going on in the city that week and approach the artistic practice to them. The workshop was open to 10 people but had to be expanded to 15. 12 people showed up in the end and the intended 1h 30min stretched to 2h 30min. 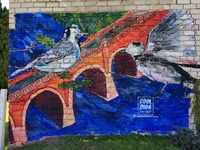 Xip i Xop kindergarten hired me through Book a Street Artist to create a mural for their façade, as they found it too empty. They had some ideas in mind, they wanted a design gearing towards geometrical shapes, pastel colours and somewhat in a "cute style". After a few design exchanges we created one everyone was happy with and the painting sessions started! The mural took six days to paint. 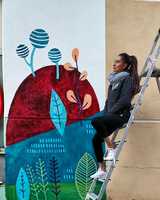 Cikade shop wanted a mural to liven their patio, as they were planning to turn in into a beer garden. They wanted a view that their customers could relate to so we chose the same street the shop is located in. It's Kuldiga's main street, Liepajas iela. 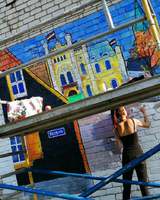 We were asked to paint a mural related to the town or history of Kuldiga. As this was to be painted in a school (Kuldīga's 2.Vidusskola), I wanted to paint something everyone could recognize and connect to. I was also working with the concept of "delocation", which takes a place and inserts it in a different location. I painted Kuldīga's old market square and I painted it with bright colours so it would bring joy and warmth to the kids during recess when Latvia became cold and dark in winter. I also tried to give it a "fairy tale aesthetic" because it was placed at a school. 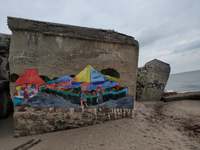 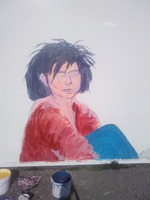 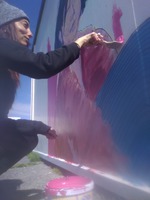 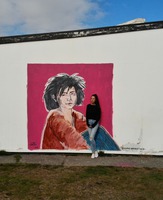 Artrvl alongside Karosta Glabsanas Biedriba in Liepaja, Latvia, flew us over to create Karosta Art Festival. To commemorate 100 years of Latvia's Independence War we painted inside the tunnels of an old soviet naval fort. 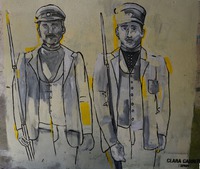 I flew over to Olive Grove Resort in Corfu to paint two murals in their rooms. The concept was Life in the island. The first day we drove around the island to take some photos and I used them as a reference. The project was coordinated with Artrvl.

One of the murals I painted is a hidden beach in Kavos and the cliffs surrounding the area. 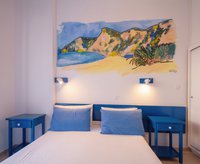 Acrylic and ink on canvas

Levante TV station hosted the VI Young Talent Award of Valencia gala and invited me to paint live during the one hour show along with musicians, dancers and the hosts of the gala.

Indultada approached me with a pictorial concept in mind, as they wanted to part from the traditional graphic design poster. Indultada beer is available in many restaurants in Valencia, Spain. 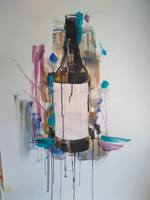 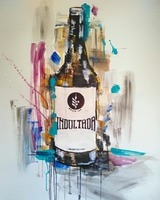 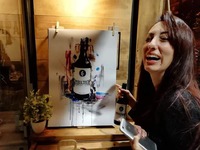 Live painting at Blue Balls Festival, a music and art festival held every summer in Luzern, Switzerland, with 120 events and an audience of 100.000 fans. Blue Balls Festival booked me to create an art piece in two hours on one of the stages of the complex.

Berlin-based Book a Street Artist agency had a painting request from a client that was looking for an artist who could create a native girl design to be placed on a skateboard. I was chosen to carry out the task and cannot be happier with the result. 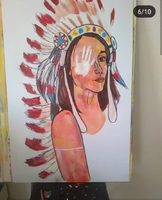 Muxmäuschenwild required twenty small individual gifts and I was happy to create a very colourful and personal portrait for each and everyone of the gifted.

Interested in what you have seen? Do you think my style fits your project? Click down below to learn more about how we can work together!